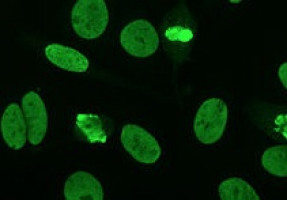 An international group of researchers has found that antibodies to the human papilloma virus type 16 (HPV16) develop in the body between six to 40 years prior to a clinical diagnosis of throat cancer, and their presence indicates a strong increased risk of the disease.

The study, which is published in the leading cancer journal Annals of Oncology, also found that having HPV16 antibodies increased the risk of throat cancer far more in white people than in black: nearly 100-fold in white people, but 17-fold in black people.

Patients with HPV-associated throat cancer tend to respond better to treatment than those whose cancer is not associated with the infection; the researchers say this may partly explain the worse survival rates among black patients.

The main causes of throat cancer (known as oropharyngeal squamous cell carcinoma, OPSCC) are smoking, alcohol use and infection with HPV16.

In the USA the proportion of OPSCCs attributable to HPV16 is around 70%; in some European countries a similar proportion is caused by HPV16, although this varies from country to country.

Dr Mattias Johansson, a cancer epidemiologist at the International Agency for Research on Cancer (IARC) in Lyon, France, who led the research, said: "Importantly, the proportion of throat cancers caused by HPV16 has been increasing over the past few decades, particularly in men, and in some countries the overwhelming majority are now caused by the virus.

"Investigating the range in time prior to diagnosis in which HPV antibodies develop is important to understand how many years an individual who tested positive would be at increased risk, and also gives important insight into the natural history of the disease. In this study, we found that antibodies can, in some cases, develop several decades prior to diagnosis of cancer. If rates of throat cancer continue to rise in the future, this biomarker could provide one means to identify individuals at very high risk of the disease who may benefit from specific preventive measures," said Johansson.

The researchers from Europe, North America and Australia, who were part of the HPV Cancer Cohort Consortium, looked at 743 patients with throat cancer and compared them with 5,814 people without cancer who were the control group.

In the years before any diagnosis of cancer, all patients provided at least one blood sample, which was tested for antibodies against the HPV16 cancer-causing E6 protein, and 111 patients provided multiple samples over a period of up to 40 years.

The median (average) time between first blood sample collection and a diagnosis of OPSCC was just over 11 years.

The first author of the study, Dr Aimée Kreimer, senior investigator at the Division of Cancer Epidemiology and Genetics, National Cancer Institute, Bethesda, USA, said: "We also found that people diagnosed in more recent calendar years were more likely to have HPV antibodies, which is consistent with what we know about the increase in the proportion of throat cancers that are due to HPV16. Although there were some people with HPV antibodies detected prior to 1995, this was relatively rare."

The researchers found that HPV16 antibodies tended to appear in people aged between about 40 to 80 years old - the median age at which antibodies were detected was 52 years, while the median age of diagnosis with OPSCC was 62.

As there is no suitable, evidence-based way to test for OPSCC before symptoms appear, more research will be needed before HPV16 antibodies could be used to detect OPSCC in its early, pre-symptomatic stages.

Kreimer said: "Although HPV16 antibodies could be a way to identify people at very high risk of cancer, we are currently missing the critical next steps in the screening process. Also, even though the antibody marker was very good at discriminating between those who would develop cancer and the controls who would not, with such a rare cancer, many people would still be likely to have a false-positive results."

Johansson concluded: "Future studies will focus on the most appropriate way to follow-up individuals who test positive for HPV16 antibodies and whether there is a way to identify pre-malignant lesions, as well as alternative ways of reducing the risk of eventually developing OPSCC. In other words, there is a long way to go before this biomarker can be used in clinical practice. While vaccination against HPV holds promise in preventing HPV-related cancers, we will not see a resulting reduction in throat cancers for several decades."

Reasons why HPV16-driven throat cancer has increased in recent decades include changes in sexual practices that started in the middle of the 20th century and a decrease in tonsillectomy rates, which results in more tissue being available for infection by the virus.

The main limitation of the study is the difference between the groups of patients who took part in the study.

For example, the group with the longest period of time between first collection of blood and diagnosis of OPSCC came from Norway, while other patient groups tended to have fewer blood samples collected over shorter timescales.

The research was carried out in collaboration with Dr Tim Waterboer, Head of Infection and Cancer Epidemiology, at the German Cancer Research Centre (DKFZ) in Heidelberg, Germany, who developed the HPV16 antibody test.