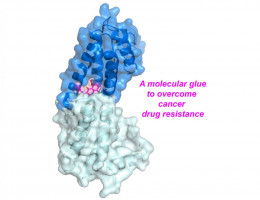 Scientists have discovered a small molecule drug that may stop cancer cells from becoming resistant to chemotherapy.

Drug resistance is a major cause of cancer relapse and is responsible for as much as 90% of deaths related to the disease.

The new compound, which was tested in an animal model of melanoma, could make current chemotherapies more powerful.

It works by thwarting cancer's ability to survive, evolve, and adapt to the DNA damage created by traditional chemotherapy drugs like cisplatin.

"Chemotherapies are often effective the first time around, but then the cancers mutate and become resistant to that drug, and the next, and the next," said senior study co-author Pei Zhou, Ph.D., a professor of biochemistry at Duke University School of Medicine.

"It reminds me of Boggarts, those shapeshifting creatures from Harry Potter that morph from one scary thing to another. The beauty of this approach is that you essentially freeze the Boggart in its current form, so you can kill it off for good," added Zhou.

The study was published in Cell.

In their simplest form, cancer cells are normal cells that are growing out of control.

Each time these cells divide, the DNA within them must replicate to generate new copies to go inside each new cell.

The first chemotherapy drugs were based on the rationale that rapidly growing cancer cells would be more sensitive to damage to their DNA.

Drugs like cisplatin are designed to damage DNA, causing the sensitive replication machinery normally tasked with copying each strand to stall.

If DNA replication is stalled for too long, cell division halts, and cells die.

The strategy is brutal and effective, even curative in some cases.

But long-term, it often fails, as cancer cells figure out a way to proliferate even in the presence of DNA damage.

"The cancer cells often swap out the high fidelity replication machinery, which usually does the copying, with a sloppy replacement that covers up the lesions and moves on," said Zhou. "As a result, the cells survive, but with mutations in their DNA."

Because this process, known as translesion synthesis, is a major cause of cancer drug resistance, it has become a major area of study in cancer research.

Scientists have identified a key protein involved, named Rev1, and have even disrupted it through genetic means - works done in the laboratories of Graham C. Walker and Michael T. Hemann at MIT, both senior co-authors of this study.

However, attempts to do the same with small molecules had never succeeded, presumably because the protein lacked an obvious binding pocket that a potential drug could exploit.

In this study, Zhou and his collaborators at Duke, MIT, and the University of Rhode Island decided to try their luck at finding a small molecule to block or inhibit Rev1.

They screened 10,000 small molecule compounds, and were surprised to find that one - a molecule called JH-RE-06 - appeared to do the trick.

The researchers used a technique called x-ray crystallography to visualise the unexpected interactions between Rev1 and JH-RE-06.

They found that when Rev1 interacts with JH-RE-06, it pairs up or dimerises with another copy of itself, creating a binding pocket where there wasn't one before.

When Rev1 is locked up in this dimer, it can no longer help cancer cells survive and attain their shape-shifting powers.

The researchers then tested the new molecule in human cancer cell lines and showed that it enhanced the ability of several forms of chemotherapy to kill cells, while also suppressing their ability to mutate in the presence of DNA-damaging drugs.

Finally, they tested it in a mouse model of human melanoma.

They found that not only did the tumours stop growing in mice treated with a combination of cisplatin and JH-RE-06, but also that those mice survived longer.

Senior study co-author Jiyong Hong, PhD, a professor of chemistry at Duke, said that they are currently creating versions of JH-RE-06 that have enhanced pharmacologic properties that could make it an even more attractive drug.

"This is a great proof of principle that it is possible to target this protein, but we have a lot of work to do to turn this lead compound into a viable candidate that we can take to the clinic," said Hong.