Physics could answer questions about breast cancer spreading to bones 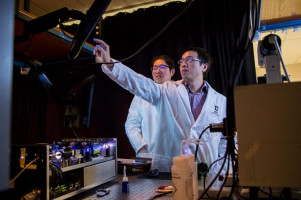 To fully understand why breast cancer spreads, or metastasises, you must also consider the how.

That's what researchers in a biophysics and imaging laboratory in the School of Science at IUPUI did as they studied the mechanics of cell migration, which can possibly explain how cancer cells generate enough force to move from the primary tumour site through the body and then settle into bones, said Jing Liu, an assistant professor in the school's Department of Physics, a Purdue University program.

Nearly 30 percent of breast cancer metastasises to other organs, with bones being among the most frequent sites.

A paper with the researchers' findings was recently published in the journal Scientific Reports. Liu and Hiroki Yokota, a professor of biomedical engineering at IUPUI, are co-corresponding authors of the paper.

"From a physics point of view, all the cell migration is driven by force," Liu said. "We really want to discover the force architecture of a cell and deliver the biomechanical and biophysical explanations toward cellular activities. The major focus of our lab is developing imaging methods to physically interpret cancer biology."

"We are working with mathematicians and engineers to develop a mathematical model and physical model of the cell migration," Liu said.

A Forster resonance energy transfer-based tension, or FRET, sensor was used to monitor the force dynamics during cell movement.

The sensor, equipped with FRET molecules, acts like a spring to measure the tiny amount of force that is generated by the cancer cell through focal adhesion and that drives the cell to move.

As the cancer cell moves, the spring expands; researchers measure the force by monitoring the change of FRET interactions.

The team at IUPUI monitored the mobility of the cancer cells and found that when a cancer cell interacts with and gets very close to a bone cell, it exhibits low tensions and slow mobility, Liu said.

The researchers hope this finding might lead to clues for how to control - and eventually stop - cell migration.

"This gives us a more precise measurement of how fast the cell is moving and where the cell will go to," Liu said. It will also provide feedback to cancer biologists, showing the impact of a drug or other treatment on the movement of the cells.

"The basic idea is to use imaging as a method to see some of the physical parameters in cancer biology,"Liu said. "Instead of only being able to look at millions of cells at time, technology has enabled us to examine a single cell. When the system is going smaller and smaller, the physical parameters inside the biological system become more and more useful and more and more important."