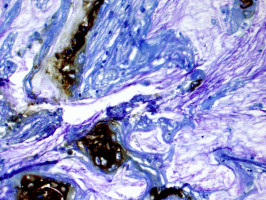 Pancreatic cancer kills more than 45,000 people in the U.S. each year, mostly due to the fact that it is detected too late for surgery to remove and halt the spread of the cancer.

Cysts in the pancreas sometimes develop into the invasive cancer, depending on the type of cyst, but such growths often are not cancerous, creating a quandary for physicians who spot them via CT and MRI scans.

Surgery to remove pancreatic cysts is often complex, so there is a need for new tools to identify which such cysts are most likely to develop into cancer and which are not.

Now, a multi-centre team led by investigators at Washington University School of Medicine in St. Louis has taken a big step toward identifying the cysts likely to become cancerous.

Testing fluid from cysts for a biomarker - an antibody called mAb Das-1 - the researchers were able to identify pancreatic cysts likely to become cancerous with 95 percent accuracy.

Current clinical guidelines are only about 74 percent accurate.

The study has been published in the journal Gastroenterology.

"Some cysts have the potential to become pancreatic cancer, so there's the thought that we should be on the side of caution and remove the cysts," said first author Koushik K. Das, MD, an assistant professor of medicine in the Division of Gastroenterology at Washington University.

"But pancreas surgery is complicated. It often requires removal of the spleen, portions of the stomach, small intestine and bile duct. In an ideal world, we only would do surgery on people whose pancreatic cysts are likely to develop into cancer. As it is, we probably don't operate on some people who need surgery and sometimes do operate when cancer isn't present because we're working with imprecise information," Das added.

Some 2 percent to 4 percent of patients ages 50 to 70 probably have pancreatic cysts, and that percentage increases to 8 percent to 9 percent in people over the age of 80, according to Das.

The vast majority of those patients have no symptoms, so when cysts are detected, doctors have to decide whether to perform surgery, knowing that a typical patient 70 years of age or older may have other unrelated serious medical problems, such as heart, lung or kidney disease, that make them less than ideal candidates for major abdominal surgery.

Although surgery is effective at removing precancerous cysts, 1 percent to 2 percent of patients who have the surgery don't survive.

The rate of complications from surgery can range from 30 percent to 60 percent.

Das said those are high risks for surgery to remove cysts that could turn out to be harmless.

The research team collected fluid from the cysts of 169 patients who had surgery to remove the pancreatic cysts.

The researchers analysed the fluid, using a test to detect the Das-1 antibody biomarker.

In previous research, the biomarker had been correlated with pancreatic cysts at high risk to become cancerous.

In the new study, the researchers found that the biomarker was more accurate than any current method at predicting cancer risk in these patients with pancreatic cysts.

"The next step is to see whether the biomarker can identify pancreatic cysts likely to become cancerous before a patient undergoes surgery," Das explained.

As a gastroenterologist, Das is using endoscopic ultrasound to distinguish patients at risk for pancreatic cancer from those whose cysts often pose no threat.

While patients are under anaesthesia, he inserts a flexible tube with a camera down through the mouth into the abdomen.

"At the end of that scope is an ultrasound probe that allows us to look into the pancreas," he said. "Then, under ultrasound guidance, we can pass a needle into the cyst to collect fluid that can be tested for Das-1 and assess for cancer risk."

Das has been collecting fluid samples for more than two years to begin to amass a large enough number of samples to validate the test.

"Many cysts, if not most, probably should be left alone," Das said. "But we do that at our peril because we may miss individuals harbouring cancer. If we had a better biomarker, we wouldn't have to rely on imperfect clinical and radiographic information."