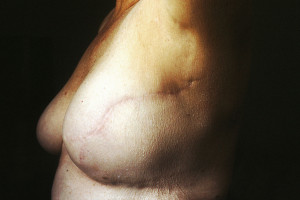 The majority of women who underwent lumpectomy or mastectomy surgeries for breast cancer report that the scars from those surgeries negatively affect their daily lives.

Yet one-third of patients said that their physician did not tell them about surgical options that minimise scarring, according to a report published recently by the journal BMC Cancer.

Breast cancer is the second most common type of cancer worldwide, with an estimated 269,000 newly diagnosed cases and more than 42,000 deaths in the U.S. in 2019, according to the National Institutes of Health.

More than 3.5 million women in the U.S. have survived breast cancer, many of whom bear scars from surgical treatments.

"After surviving the trauma of cancer, many women must still battle with the psychological and physical consequences of both a new cancer diagnosis and its treatment," said author Jennifer S. Gass, MD, FACS, chief of surgery at Women & Infants Hospital, a Care New England hospital; director of the breast fellowship at the Breast Health Center at Women & Infants; a member of the Care New England Medical Group; and clinical assistant professor at The Warren Alpert Medical School of Brown University.

"Our findings illustrate how important it is for surgeons to ensure their patients are aware of the long-term impact of cancer surgery and how it will affect their bodies. Patients should know if they might be candidates for surgical options that minimise morbidity. A surgical scar is a morbidity," said Dr. Gass.

The survey reports that two-thirds of respondents do not like the location of their scar.

This scar impacted the daily lives of many women, in terms of feeling self-conscious and affecting clothing choices.

Yet, one in three breast cancer patients said their physician never told them about surgical options to reduce the visibility of their scars and thus potentially the psychological and physical impact of scars.

The survey of 487 women who had undergone lumpectomy and/or mastectomy surgeries is the first peer-reviewed, nationwide study to examine the negative association of surgical scars and breast cancer survivorship, how those scars affect their lives, and whether scars matter.