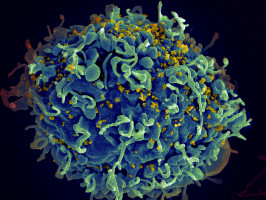 The results of a study led by physicians at Fred Hutchinson Cancer Research Center showed that patients living with HIV and one of a variety of potentially deadly cancers could be safely treated with the immunotherapy drug pembrolizumab.

During an ASCO presentation concurrent with release of a study in JAMA Oncology, Fred Hutch researcher and lead author Dr. Tom Uldrick said that in nearly all cases it was safe to use the drug in patients with cancer and HIV.

The "adverse events profile," a measure of the safety of the drug in the study, was not substantially different from prior studies that excluded such patients.

The results, study authors said, are likely applicable to five similar drugs that block receptors known as PD-1 or PD-L1 on the surface T cells.

"Our conclusion is that anti-PD-1 therapy is appropriate for cancer patients with well-controlled HIV, and that patients with HIV and cancer can be treated with the drug and should be included in future immunotherapy studies," Uldrick said.

The 30-patient trial studied only pembrolizumab.

HIV-positive patients with different cancers that might respond to the drug were included in the trial.

Fred Hutch immunotherapy researcher Dr. Mac Cheever is director of the NCI-funded Cancer Immunotherapy Trials Network, which carried out the trial, and he is senior author of the JAMA Oncology paper.

The study was conducted at seven different cancer centres across the United States, including the HIV and AIDS Malignancy Branch of the National Cancer Institute, in Bethesda, Maryland.

Overall, the safety profile of pembrolizumab in people with HIV and cancer was similar to that noted in clinical trials in the general population.

Although the primary purpose of the study was to evaluate safety, it also provided a snapshot of the anti-cancer activity of the drug on these patients.

One patient with lung cancer had a complete response to treatment, and activity was also noted in important HIV-associated cancers, including non-Hodgkin lymphoma, Kaposi sarcoma and liver cancer.

An unexpected death on study from a rare KSHV-associated B-cell lymphoproliferation was noted in one patient and while the association with therapy is still unclear, it has led to recommendations to use substantial caution if anti-PD-1 therapy is considered in the setting of KSHV-associated multicentric Castleman disease.

The researchers concluded that anti-PD-1 therapy may be considered for FDA approved indications in patients with HIV who are on antiretroviral therapy and have a CD4 count above a certain threshold (100 cells per microlitre of blood). However, more research is needed as to its effectiveness in the setting of HIV infection.

The FDA, Friends of Cancer Research, and the American Society of Clinical Oncology have all recommended that HIV patients should be included in more clinical trials.

The NCI has generally allowed patients with HIV to enrol on the immuno-oncology studies that it sponsors with PD-1 and PD-L1 inhibitors.

However, this trial was one of only two trials sponsored by the NCI to focus exclusively on patients living with HIV, and it has been the first prospective trial to report its results.

"Exclusion of people with HIV in clinical trials is a longstanding problem that grew out of the poor outcomes of AIDS patients with cancer, before there were effective antiviral therapies for HIV," Uldrick said.

In prior research, Uldrick surveyed 46 recent clinical trials that led to approval of cancer drugs, and found 30 contained explicit exclusions for patients with HIV, and nine others where an exclusion was implied.