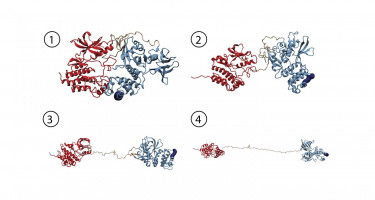 The cytoskeleton is a structure that not only helps cells maintain their shape and internal organisation, but also enables them to perform functions like movement and migration, that is to say, the movement that takes cells far from the place where they are initially located.

Migration forms an essential part of the spread of cancer cells from the place where they first formed to another organ or tissue (metastasis).

So far, this association is not fully understood: how is the mechanical force generated by the cytoskeleton transformed into a biochemical signal that controls cell migration?

During his work at the Spanish National Cancer Research Centre (CNIO), Daniel Lietha (who has now moved to the Biological Research Center, CIB-CSIC) led an international study that has answered this question.

He worked jointly with the teams headed by Hermann Gaub and Frauke Gräter.

The study, published in Proceedings of the National Academy of Sciences (PNAS), has found that the protein FAK is one of the key molecules that respond to the forces generated by the cytoskeleton, activating biochemical signals regulating cell adherence and migration.

These findings can help broaden the knowledge of how tumour invasion and metastasis are initiated.

Focal adhesion kinase, or FAK, is present in the cytoskeleton and the cell anchorage to the components of its external surroundings.

"It is a signalling molecule that is key in a structure activated by forces that are generated by the contraction of the actin filaments in the cytoskeleton," explains Lietha, co-corresponding author of the study.

"Until now, it was unclear whether FAK can act as a sensor to these forces required for cell movement. Based on the hypothesis that FAK is such a sensor, we carried out our study," he adds.

The researchers who took part in the study used atomic force spectroscopy to simulate the forces generated by the contraction of actin filaments in the cytoskeleton.

They found that FAK changed as a response to these forces.

One of these changes was related to the shape that FAK adopts when it activates the biochemical signalling involved in cell migration.

Atomic force spectroscopy is a technology that allows to study the behaviour of various specimens under force, from intact cells to single molecules.

"Actually, we have used a specific configuration of this technology pioneered by Hermann Gaub's team at the LMU, whose sensitivity and precision provide measurements of a single molecule with a high degree of accuracy," says Lietha.

Thanks to this technology, researchers have obtained detailed mechanical information on FAK which together with knowledge of its atomic structure, previously described by Lietha, can be interpreted in terms of how force induces changes in the structure to activate FAK.

The Molecular Biomechanics group at HITS has simulated this process on high performance computers to obtain a fully dynamic view of these events.

"We could show that this signalling protein not only gets activated by force but also stays active while being further stretched out."

The mechano-environment of a cell influences its behaviour.

The focal adhesion kinase acts as sensor for changes in the extracellular and intracellular framework.

"In single-molecule atomic force microscopy experiments and steered molecular dynamics simulations, we could show a force-mediated opening of the auto-inhibitory complex of FAK and, consequently, the activation of the kinase," describes Magnus Bauer, first author of the publication and graduate student in the group of Hermann Gaub at the LMU, the experimental approach in Munich.

In cells, the mechano-activation of FAK is triggered upon stress between the cytoskeleton and the extracellular matrix.

"With FAK it seems we found the first non-muscle enzyme to be directly activated by mechanical force," highlights Bauer.

"Transferring our data into cellular systems, we assume that translation of physiological forces into the biochemical signals could be one way to trigger the migration of cancer cells."

These are key findings to go deeper into the study of tumour invasion and metastasis.

"In tumours, stiffening of the stroma results in increased forces that activate signalling pathways via FAK, that strongly promote tumour invasion and metastasis," says Lietha.

The stroma is a tissue that surrounds cancer cells in tumours and affects their progression.

Understanding how stroma stiffening and its implication in the activation of adhesion signalling are related to tumour invasion, may provide the basis for the development of therapies targeting this mechanism.

Now that it has been found that the forces generated by the cytoskeleton prompt conformational changes in FAK, further studies are needed to directly measure the biochemical signals in response to mechanical forces.

Image: Molecular dynamics simulation provides atomic details of force induced FAK activation. Starting from an autoinhibited conformation of FAK (1), force induces a series of changes which leads to a fully open and active form of FAK (2-4).