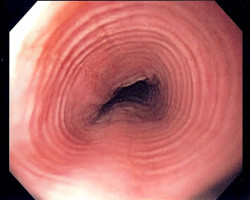 Blocking two molecular pathways that send signals inside cancer cells could stave off oesophageal adenocarcinoma (EAC), the most common oesophageal malignancy in the United States, according to new research out of Case Western Reserve University School of Medicine.

They found 80 percent of tumours had unusually active genes related to two specific pathways, and that exposing the cells to pathway inhibitors stymied EAC tumour growth in mice.

The pathways represent molecular chain reactions that were overactive in patient tumour cells, but not in biopsies from patients with non-cancerous oesophageal conditions, including Barrett's Oesophagus.

Harmful effects of these pathways could be reduced by turning down JNK or TGF-beta activity.

Patients struggle to swallow as tumours and cancer cells narrow their oesophagus.

Some require nasogastric feeding tubes in end stages of disease. Limited available treatments to shrink tumours include surgery, radiation, or chemotherapy, but the majority of EAC tumours are resistant.

They compared EAC biopsies to those collected from patients with conditions that often precede EAC, but who did not develop the cancer.

After finding JNK and TGF-beta pathways to be overactive only in EAC biopsies, they then incubated EAC tumour cells with therapeutic small molecules designed to block the pathways.

Exposure to JNK or TGF-beta inhibitors reduced the ability of EAC cells to proliferate, migrate, or form tumours when transplanted into mice.

"As EAC develops, TGF-beta switches from a growth suppressor to a growth promoter. This is unlike its function in other cancers such as those arising in the colon." Varadan added, "Our unique application of advanced mathematical modelling that we developed allowed us to tease out these intricate mechanisms, which would have otherwise been missed."

The results open a new targeted therapeutic avenue for EAC, and lay the foundation for studies in humans. Said Guda, "We are in the process of initiating a human clinical trial using an oral TGF-beta pathway inhibitor in EAC patients. Ultimately, we'll use findings from that trial to guide development of TGF-beta inhibitors as a potential new targeted treatment option for EAC patients."