Engineering T cell receptors for the targeting of CMV and glioblastoma 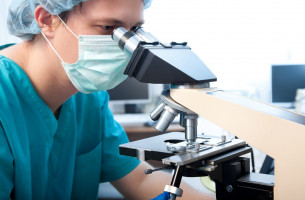 Researchers have engineered "antibody-like" T cell receptors that can specifically stick to cells infected with cytomegalovirus, or CMV, a virus that causes lifelong infection in more than half of all adults by age 40.

These receptors represent a new potential treatment option, could aid the development of CMV vaccines and might also be used to target brain tumours.

In the healthy immune system, CMV lies dormant as T cells circulate through the body and detect infected cells.

While antibodies recognise only proteins on the surface of cells, T cells use their membrane-bound T cell receptors, or TCRs, to detect disease-associated proteins hiding inside the cellular membrane.

TCRs can then tell T cells to destroy the infected cell, which is normally the case with CMV.

However, for immunocompromised patients, this defensive mechanism is greatly diminished and the virus can become life-threatening.

Researchers have used T cells to treat the disease before, but engineering and transplanting whole T cells are both costly and invasive.

In a study published in the Journal of Biological Chemistry, a team of engineers took an alternative approach, producing CMV-detecting TCRs that, like antibodies, float freely through the body and bind tightly to their diseased targets.

"Right now we've got a molecule that looks like an antibody but it binds to a (CMV-associated) peptide that would normally be recognised by a TCR," said Jennifer Maynard, a professor of chemical engineering at the University of Texas at Austin and senior author of the study. "Antibodies cannot normally access these molecules so that's a big deal."

"However, those cell types have had minimal success in generating stable human TCRs. Because the receptors evolved in mammalian cells, the molecular machinery of foreign cell types often introduces defects", Maynard said.

"These proteins are really difficult to work with, so we thought we'll just keep them in the environment where they're happy, and they're happy on the surface of a mammalian cell," Maynard added.

TCRs naturally create loose bonds with their targets but the authors wanted theirs to bind and not let go.

To strengthen these connections, the authors randomly mutated the DNA of the TCR component that detects the CMV peptide.

They then inserted many versions of the mutated DNA into hamster cells, which then manufactured about a million different types of TCR.

The researchers then measured which mutated version established the strongest bond by exposing the myriad TCR variations expressed on the surface of the hamster cells to the CMV peptide.

"We found one that was our favourite," Maynard said. "We improved the binding affinity 50-fold."

Then the challenge was to liberate the TCRs from the T cell membrane.

To achieve this, the researchers further edited the DNA so that the TCRs would attach to the protein that composes the stem of "Y"-shaped antibodies.

To help these proteins hold their shape, they added a bond inside the TCR and also prevented any sugars from attaching.

"Altogether, these changes seemed to do the trick", Maynard said.

These "antibody-like" TCRs could be used to track disease progression in patients or to evaluate how well developing vaccines are working.

"These TCRs might also restore some of the lost immune response in immunocompromised patients by instructing their cells to attack CMV infections", Maynard also mentioned.

Another big opportunity for this new molecule is to treat glioblastoma.

"Although the brain tumours do not produce many distinct markers, they do suppress the immune system, which in CMV-infected patients can bring the virus back to life within the cancer cells", Maynard explained. "Our protein could be used to specifically target glioblastoma cells, and it would provide a very unique marker. We would use this to monitor or kill some of those tumour cells."