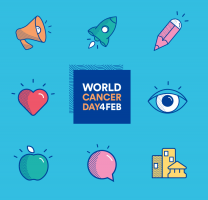 Taking place under the theme of ‘I Am and I Will’, today’s World Cancer Day led by the Union for International Cancer Control (UICC), aims to inspire and encourage action from individuals, the health community, and governments to improve public awareness and access to early detection, screening and diagnosis.

In 2018, there were more than 18 million new cases of cancer diagnosed of which nearly 5 million cases of breast, cervical, colorectal, and oral cancers could have been detected sooner and treated more effectively.

Early detection, screening, and diagnosis have been proven to significantly improve patient survival rates and quality of life as well as significantly reduce the cost and complexity of cancer treatment.

However, barriers to achieving higher rates of early cancer detection need to be addressed now at the individual, health system, and governmental level to significantly reduce the personal and financial burden of cancer worldwide.

Chief Executive Officer, Union for International Cancer Control, Dr Cary Adams said: “This World Cancer Day, we want people to know that many cancers can be managed and even cured, especially if they’re detected and treated as early as possible. By detecting cancer at its earliest stage, we seize the greatest opportunity to prevent millions of avoidable deaths worldwide.”

Universally, the majority of cancers are amenable to early detection.

When a cancer is detected at an early stage - and when coupled with appropriate treatment, the chance of survival beyond five years is dramatically higher than when detected at a later stage when the tumour has spread and the disease is more advanced.

In the US, the five-year survival rate for women diagnosed with cervical cancer at an advanced stage is just 15%, compared to 93% if diagnosed when the cancer has not spread.

This pattern holds even in lower income settings.

Early diagnosis can also significantly reduce the cost of treatment.

Studies in high-income countries show that treatment costs for early-diagnosed cancer patients are two to four times less expensive than treating those diagnosed with advanced-stage cancer.

A US study estimates the national cost savings from early diagnosis at $26 billion per year.

Despite this, millions of cancer cases are found late, leading to expensive and complex treatment options, diminished quality of life, and avoidable deaths.

UICC President and mother of a cancer survivor HRH Princess Dina Mired of Jordan said: “Cancer thrives on late presentation of the disease. The delay allows it to spread and cause damage totally unchallenged. That is why, on this World Cancer Day, I urge you all to educate yourselves with the signs and symptoms of cancer and to not be afraid to seek help immediately. Equally, I urge governments to prioritise and systemise early detection and screening programmes to allow for better access and to give all a fighting chance to beat cancer.”

Everyone is susceptible to physical, psychological, or socioeconomic barriers to accessing early cancer detection.

Some common barriers individuals come up against are age, masculine gender norms, feelings of shame and fear and poor health awareness.

Masculine gender norms, combined with a broader lack of men’s health promotion, can prevent help-seeking behaviour even when men might suspect cancer early on.

The strongest factor associated with men's help-seeking behaviour has been shown to be the encouragement and support of spouses and family members.

In 2018, a UK report found one in four people would not seek medical attention after discovering a potential cancer symptom for fear of what the diagnosis would be.

To change these behaviours, cancer awareness-raising efforts must stress the importance of early diagnosis and encourage early help-seeking.

In Bangladesh, a survey of breast cancer patients reported that almost half of respondents first sought alternative treatment before seeking conventional medical advice, which resulted in an average disease presentation delay of four months.

To achieve greater screening participation, it’s also important to ensure that programmes are culturally appropriate, which could mean enhanced cultural competence training for clinical staff or an increase in the number of programme educators from a cultural group.

There is also an opportunity to increase awareness among doctors, nurses, and other health practitioners to improve early cancer detection, especially at the primary care level.

In the UK, a study found that most people present cancer signs or symptoms at the primary care level in the year before their formal cancer diagnosis.

However, even when a healthcare professional might suspect cancer, weak referral systems can oftentimes prevent them from efficiently referring these patients on to pathology services for diagnostic testing, which inevitably leads to needless delays in treatment.

When suspected cancer patients do get referred for diagnostic testing, limited access to pathology services and diagnostic technologies can hold back health services from delivering early diagnoses and treatment of cancer.

Governments must translate their commitments into action

This World Cancer Day, as part of its flagship Treatment for All initiative, UICC and its 1,100 member organisations across more than 170 countries are calling on governments to translate their commitments to reduce the burden of cancer into demonstrable national action.

Strong early detection and timely diagnosis measures must be a part of any country’s National Cancer Control Plan, alongside concrete measures to improve cancer prevention, treatment and care.

By implementing resource-appropriate strategies on prevention, early detection, and treatment, up to 3.7 million lives can be saved every year.

To improve early detection, screening, and diagnosis, and in line with guidelines set out by the World Health Organization, UICC recommends that all governments should:

Director-General, World Health Organization, Dr Tedros Adhanom Ghebreyesus said: “For too many years, cancer has been considered too complex and too expensive to manage. The opposite is true. If we fail to respond decisively to cancer, the economic and social consequences will be astronomical. To win the fight against cancer, countries must ensure that services for the prevention, early diagnosis and treatment of cancer, as well as palliative care, are integrated into benefit packages as part of efforts to achieve universal health coverage.”