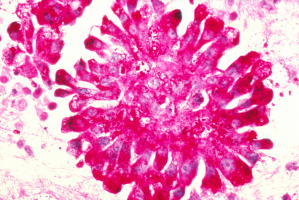 It can be divided into four groups with different characteristics of clinical importance - a new study at Karolinska Institutet in Sweden reveals.

The results, published in the journal Clinical Cancer Research, also show that the survival rate of patients with a certain type of tumour is better than predicted.

Sarcoma is a collective name for 50 different cancers in the body's mesenchymal (soft) tissues.

Undifferentiated sarcoma of the uterus is a cancer with a very poor prognosis, with a typical survival of less than two years.

The only treatment of any importance for the survival of a patient is surgery, whereas radiation therapy and chemotherapy do not have any pronounced effect.

Since the tumour is so rare, we have limited knowledge of it.

In the current study the researchers examined tumour material from 50 patients with the help of both advanced molecular analyses and with more traditional clinical laboratory analyses.

The aim was to gain new knowledge about the tumour's biological characteristics and relate these to the patient's survival and the routine methods which are used in the laboratory.

By means of molecular mapping and analysis of gene expression the tumours could be divided into four previously unknown groups.

The four groups had different biological characteristics which are considered by the researchers to be of importance for patients.

Firstly, the patients had different survival rates depending on the group that the tumour belonged to.

Secondly, the most aggressive tumours were characterised by a distinctive microscopic appearance and protein expression, which makes them identifiable with the help of common laboratory techniques.

With the help of additional analyses, the researchers were able to identify new potential treatment targets.

"It is too early to propose a new treatment that will be useful for the patients today, but the study opens up new avenues for future research, which will create in time new treatment possibilities for women who suffer from these rare tumours," says Joseph Carlson, Associate Professor at the Department of Oncology-Pathology, Karolinska Institutet, who has led the study.

The study also shows that some of the patients' life expectancy is not as gloomy as one thought before the study, since there is a group of patients who survive for a much longer time than two years, and this group can be identified by means of current laboratory techniques.