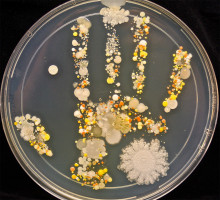 The research, published in the journal PLOS ONE, could eventually be used to shape treatment and screening strategies for patients.

Collaborating with researchers at Zhengzhou University, the Fred Hutch team ran tests on 49 patients' stomach endoscopy and stool samples, looking for H. pylori with a variant of the cagA gene, known as EPIYA D.

They found 91 percent of the patients with the EPIYA D strain also had cancer.

"We've known the H. pylori bacterium has a strong correlation to stomach cancer, but it's been difficult to pinpoint why certain patients, especially in areas like Northeast Asia, are more susceptible to stomach cancer," said Dr. Nina Salama, senior author of the study and a member of Fred Hutch's Human Biology and Public Health Sciences divisions. "While it's preliminary in nature, these results could be the first step towards identifying the highest risk groups and improving screening and treatment plans."

H. pylori is a spiral-shaped bacterium that grows in the mucus layer that coats the inside of the human stomach and causes ulcers.

More than 50 percent of the world's population is believed to have the infectious disease, which is the primary identified cause of stomach cancer.

According to the World Health Organization, stomach cancer was the fourth most common cause of cancer death in 2015, killing over 750,000 people globally.

"Unfortunately, infections like H. pylori directly or indirectly, cause up to 20 percent of cancers worldwide," added Salama. "But knowing the cause gives us a clear target to develop vaccines for prevention or tools to better recognize risk."

The research team acknowledges the small number of participants in the study and limits the conclusions that can be drawn.

The research teams from Fred Hutch and Zhengzhou University are hopeful to collaborate further on a much larger study.