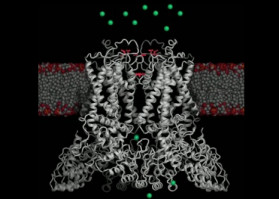 Calcium channel blockers (CCBs), specifically the short-acting form of CCBs, which are prescribed to treat high blood pressure, were associated with an increased risk of pancreatic cancer in postmenopausal women, according to a study presented at the AACR Annual Meeting 2018, April 14-18.

“Pancreatic cancer is the fourth leading cause of cancer-related mortality in the United States, with an estimated 44,330deaths in 2018,” said the study’s lead author, Zhensheng Wang, PhD, a postdoctoral associate at the NCI-designated Dan L Duncan Comprehensive Cancer Center at Baylor College of Medicine in Houston.

Previous research has suggested that sRAGE has an anti-inflammatory effect on the body, and it has been associated with lower risk of pancreatic cancer.

“We were, however, surprised by the unexpected increased risk of pancreatic cancer observed among users of short-acting CCBs,” Wang said.

The authors conducted a prospective cohort study of 145,551 postmenopausal women ages 50 to 79 who were enrolled in the Women’s Health Initiative, a long-term national health study, between 1993 and 1998.

They collected data on any medications the women were taking, including product and generic name, duration of use, and dosage form.

By Aug. 29, 2014, the researchers had ascertained 841 pancreatic cancer cases among the women.

In these women, the researchers measured serum levels of sRAGE using immunoassay among a subset of 489 pancreatic cancer patients and 977 non-cancer controls.

They found that a 66% higher risk of incident pancreatic cancer was found among the women who had ever used short-acting CCBs.

Women who had used short-acting CCBs for three or more years were found to have a 107% higher risk of pancreatic cancer than those who had used other non-CCB antihypertensive drugs.

CCBs, in particular short-acting CCBs, were the only antihypertensive medication that was associated with an increase in pancreatic cancer risk.

Ever-use of ACEi, beta blockers, diuretics, and long-acting CCBs was not associated with increased risk of pancreatic cancer.

The study also found that women who had ever used short-acting CCBshad significantly lower sRAGElevels than women who used any other anti-hypertensive medications.

The authors noted that while further research will be necessary to confirm these findings and understand the mechanisms, “the blockage of the calcium channel caused by use of CCBs may potentially reduce sRAGE release and thus further decrease the levels of anti-inflammatory sRAGE. This is important as chronic inflammation is a well-recognized risk factor for pancreatic as well as many other cancers.”

“Our findings on short-acting CCB use and pancreatic cancer risk are novel and of potential broad medical and public health significance if confirmed. Short-acting CCBs are still prescribed to manage hypertension, which is one of the components of metabolic syndrome, and metabolic syndrome is a possible risk factor for pancreatic cancer,” Wang said.

This study was funded by NIH-National Cancer Institute (5R01CA172880-03) and by the Houston VA HSR&D Center for Innovations in Quality, Effectiveness and Safety (CIN13-413).Wang is supported by a Research Training Grant from the Cancer Prevention and Research Institute of Texas and the WHI program is funded by the National Heart, Lung, and Blood Institute, National Institutes of Health.

The authors declare no conflicts of interest.