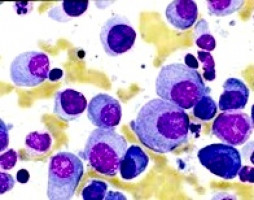 Researchers have revealed 40 genes involved in the development of myeloma, increasing our understanding of the complex genetics behind the incurable blood cancer.

The discovery will help drive the development of more personalised treatments for myeloma, which is the second most common blood cancer in the UK.

The team, based at The Institute of Cancer Research, London, and largely funded by the charity Myeloma UK, uncovered new areas of coding, and non-coding DNA, that drive the early progression of myeloma.

The research was published in the journal Leukaemia, and was also supported by Bloodwise and Cancer Research UK.

Myeloma arises from the bone marrow and approximately 5,500 people are diagnosed with the cancer every year in the UK.

Increasing our knowledge of the complex pathways driving the development and progression of myeloma is going to be key to identifying new myeloma therapies, and to enable the tailoring of patient treatments.

DNA can either be coding or non-coding. If our DNA is like a recipe book, then the coding DNA is the instructions on how make individual recipes, and the non-coding DNA acts like the scene setting paragraphs and pictures that help us get the interpretation of this recipe right.

The entire genome contains both coding and non-coding DNA and may be sequenced in a process called whole genome sequencing, or WGS.

In whole exome sequencing, or WES, only the small percentage (1.2 per cent) of the genome that codes for proteins is sequenced, and the non-coding regions are not.

The researchers, led by Professor Richard Houlston and Dr Martin Kaiser at The Institute of Cancer Research (ICR), analysed the WES data from 804 people with myeloma alongside the WGS data of 765 myeloma patients.

They found that 16 genes were disrupted in coding regions of DNA, and 15 in non-coding areas.

Tumour suppressors PAX5 and HOXB3 were found to be downregulated by non-coding mutations, consistent with their decreased expression contributing to the development and progression of myeloma, also seen in other B cell cancers.

The ICR researchers have now added TWEAK, TRAF2 and PRKD2 to the list of genes in myeloma that are disrupted by coding mutations, COBLL1 as dysregulated by mutations in non-coding DNA, and MAP3K14 as upregulated by DNA reorganisation.

Professor Richard Houlston, Professor of Molecular and Population Genetics at The Institute of Cancer Research, London, said “We need smarter, kinder treatments for myeloma that are more tailored to each person's cancer. Exhaustive genetic research like this is helping us to make that possible. Our findings should now open up new avenues for discovering treatments that target the genes driving myeloma.”

Dr Simon Ridley, Director of Research at Myeloma UK, said “This new research is a valuable step forward in our understanding of the complex genetic changes which drive myeloma. More research investment is needed to understand fully the genetic and molecular processes behind myeloma and related diseases, and to translate this knowledge towards patient benefit. Myeloma UK does not receive government funding and we depend upon the generosity of our supporters to fund research.”