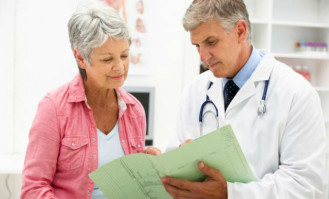 Breast cancer is the second most common cancer among women in the United States, with more than 230,000 women diagnosed annually.

Patients often describe the process of making a treatment decision as worrisome, so one research team wanted to explore how these patients became informed about their treatment options, and why some women might feel less than completely informed.

The researchers found that the majority of women who had breast cancer operations reported not feeling completely informed about their treatment options.

Patients using the decision aid were more likely to recognize that waiting a few weeks to make a decision regarding their breast cancer operations would not negatively impact survival.

Results from both studies appear in the Journal of the American College of Surgeons.

"We were really interested in providing the patient perspective," said Sunny Mitchell, MD, a breast surgeon in Stratford, CT, and the lead author of the first study, based on a nationwide survey that found the majority of women did not feel completely informed about their treatment options before undergoing breast cancer surgery. "On top of exploring how women become informed about their treatment options, we also wanted to identify any opportunities for improvement," Dr. Mitchell said.

The study, designed as a post-treatment survey, was administered by an independent public opinion research firm and completed via the Internet in June 2016.

Participants were recruited from health advocacy groups, clinics, and other health-related organizations, and were eligible to take the survey if they were female, ages 18-99, received a breast cancer diagnosis, and had undergone lumpectomy, mastectomy, or both procedures.

There were 487 respondents who completed the survey.

The survey also asked participants how informed or uninformed they felt about treatment options before undergoing breast cancer operations.

The authors found that, among lumpectomy patients, only 47 percent said they felt completely informed.

Dr. Mitchell said she was "definitely surprised by the large percentage of women who reported not feeling completely informed."

In order to address this deficiency, Dr. Mitchell said that future studies could focus on providing consistent, reliable information in a variety of formats, and measuring which ones are the most effective.

Formats could include brochures, decision aids, and videos to ensure that patients have enough information to make advance treatment decisions.

While many patients will make efforts to educate themselves on their own, the authors wrote, "it is unrealistic to expect that the majority of patients have sufficient health literacy, research skills, information access, and clarity of mind to inform themselves" about all treatment options, and to make the best decision.

Therefore, it should be the responsibility of the physician to educate the patient about treatment options and to ensure she's sufficiently informed to make a decision. In addition to providing the information, Dr. Mitchell noted that physicians should also reassure patients.

Although timely treatment should be initiated, she said, patients do actually have more time than they think to make a treatment decision.

Like Dr. Mitchell's team, the second research team was also interested in how patients received information about treatment options.

These researchers studied decision aids and found that these materials were more effective in informing patients when compared with standard cancer information websites.

During their initial surgical consultations, breast cancer patients who used the web-based decision aid tools were more engaged, better able to articulate their concerns, and quicker to voice their opinions, said lead study author Heather Neuman, MD, MS, FACS, an associate professor in the department of surgery at the University of Wisconsin-Madison.

From April 2014 to June 2016, the research team randomized women newly diagnosed with stages 0 to III breast cancer who were considering an operation within the UW breast program by sending them a web link via email.

The link took patients to either a web-based decision aid or to standard cancer websites, including breastcancer.org, the American Cancer Society, and the National Cancer Institute.

"In addition to providing information, the decision aid allows patients to compare choices by presenting the information in a parallel way," Dr. Neuman said. "It includes extra pieces of information that prompt patients to think about their values and preferences."

After receiving the links and reviewing the information, patients received a questionnaire in the clinic prior to their first surgical consultation.

The instrument presented five items to assess knowledge on key concepts relevant to decision making for a breast cancer operation.

"Patients come in with this urgency, and this finding tells them they can slow down. They don't need to have that anxiety," Dr. Neuman said, adding that her team plans to conduct a similar study on the use of decision aids in an underserved community in Memphis, Tenn.

Decreasing the urgency surrounding the decision-making process may in turn increase the quality of the surgeon-patient consultation, the authors wrote, as patients may be more open to hearing the options and better prepared to consider them.

Dr. Neuman emphasized that patients receiving information in any form from a physician--rather than having to search for things online themselves--is very helpful.

"This process of sending something by email works, and for a general surgeon in a more rural area, that's something they could do to improve care," she said.