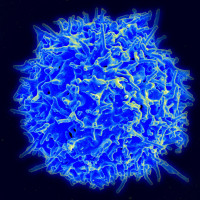 The presence of tumour-infiltrating lymphocytes (TILs) varied significantly in the tumours of African-American and European-American women with triple negative breast cancer (TNBC), suggesting that TILs may be a useful prognostic biomarker, according to the results of a study presented at the Tenth AACR Conference on The Science of Cancer Health Disparities in Racial/Ethnic Minorities and the Medically Underserved.

TNBC does not express three of the proteins that cause other types of breast tumours to grow - oestrogen receptor, progesterone receptor, or Her2/neu.

Therefore, there are no targeted therapies currently available for TNBC.

"Thus, there is an urgent need to investigate robust, clinically applicable biomarkers that can help clinicians discern which patients are likely to have a more aggressive disease course and guide the personalised treatment of TNBC," she added.

TILs are immune cells that kill tumour cells and are associated with tumours of higher grade and stage, TNBC status, and lymph node metastasis.

Previous research has also shown that higher counts of TILs are associated with better survival in TNBC patients.

Wright said further research would be required to explain the mechanisms, but one theory is that more aggressive tumours elicit stronger infiltration of lymphocytes into the tumour.

None of the patients had undergone neoadjuvant chemotherapy.

Significant differences were also observed among early-stage TNBC patients, but not among late-stage patients.

A greater presence of overall and peripheral TILs were also associated with a lack of androgen receptor (AR) expression among early stage AA TNBC patients.

The lack of AR reception classifies some TNBC cases as quadruple negative, and this subtype is more prevalent among African-American compared to European-American TNBC patients, Wright said.

Considering the range of characteristics that were associated with higher TIL counts, Wright said testing for TILs could potentially provide clinicians with useful information for TNBC patient prognosis.

"These findings uncover a previously unrecognised disparity in the tumour microenvironment between African-American and European-American TNBC patients," Wright said. "If confirmed, these findings suggest TILs can be used to predict patient prognosis in the early stages of disease for African American TNBC patients. This insight is clinically actionable and of great potential value for guiding treatment of these patients so that their survival may be improved."

Wright said the study's main limitation is that it only included patients who did not receive neoadjuvant chemotherapy.

She said retrospective studies that examine racial disparities in TILs among patients who did receive neoadjuvant chemotherapy could help confirm the role of TILs in TNBC.