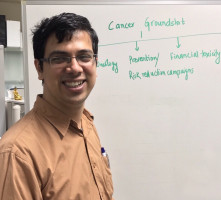 Detection of circulating tumour cells and circulating tumour DNA in a blood sample, called liquid biopsy, has revolutionized cancer diagnostics and treatment decision-making. It was only a matter of time before liquid biopsy was introduced for cancer screening purposes as well. In a proof-of-concept study testing the utility of liquid biopsy in cancer screening, researchers in Hong Kong studied whether the detection of circulating Epstein Barr Virus (EBV) -DNA in blood can be used as a biomarker for early detection of nasopharyngeal carcinoma (NPC). A positive test would be reconfirmed by another test 4 weeks later and if the participant tested positive in the second test as well, a nasal endoscopic exam and an MRI would be performed for diagnostic confirmation. Of 20,174 participants who were screened, 1112 tested positive on the first test and only 309 (1.5% of screened, 27.8% of first test positives) tested positive twice. Of those, 275 underwent endoscopic exam and MRI of which 34 had NPC. The authors conclude “Analysis of EBV DNA in plasma samples was useful in screening for early asymptomatic nasopharyngeal carcinoma” and the editorial joins the celebration.


The study and the editorial celebrate this study as a big success, and I do think we should congratulate the authors on undertaking this huge study testing liquid biopsy as a screening tool for the first time - but here are a few points both the paper and the editorial fail to highlight.  First, the conclusion that this screening test achieved superior results was based on a comparison of their results with a historical control cohort from more than a decade ago to show that with EBV-DNA screening, more tumours were detected at an early stage and patients had better PFS. All the pitfalls and biases associated with making comparisons with historical control are well known. Even then, only the benefits with regards to earlier stage at presentation and PFS have been mentioned, but not overall mortality. It is also interesting to note that of 34 detections, 24 had stage I or II disease that is potentially curable. To put this into perspective, of 20,174 screened, 1112 were positive on first test but only 309 tested positive twice (803 suffered unnecessary anxiety for 4 weeks between the two tests). Of those, 266 had no NPC detected by endoscopy and MRI (overtesting). Of those, 32 patients had to undergo unnecessary biopsy for prominent lymphoid tissues but all tested negative.  Thus, among 20,174 screened, there were 24 early stage potentially curable NPC detected by this test versus 266 who had to undergo unnecessary endoscopy and MRI and 32 who had to undergo unnecessary biopsy. These data should be clearly conveyed and discussed during any screening consultations. Although the issue of screening NPC is probably irrelevant in most of the countries where the incidence is low, this is important in endemic regions such as Hong Kong.

From screening to prevention

Preventing cancer is probably the best intervention for cancer control. Unfortunately, there are very few strategies that actually help prevent cancer except for a few vaccines. Drug-based cancer prevention has usually been met with failure, more so in lung cancer. Thus, the suggestion that canakinumab - an inhibitor of IL-1B might prevent lung cancer was provocative and garnered lots of news. However, on delving deep into the study, I am not as optimistic. First, this study was conducted among patients with atherosclerosis and thus, cannot be extrapolated to the normal population.  Second, this trial was not designed to look at cancer incidence. For proper estimation of cancer prevention, probably the sample and follow up is too small/short. Further, because this was not the primary purpose of the study, this finding could simply be an artifact of testing. In other words, maybe if we looked into other cancers such as pancreatic or gastric, we might find a statistical difference for the other cancers as well. Third, the number of cancer cases detected was low and the apparent preventive effect was seen with only a 300mg dose. Fourth, and most importantly, there was no benefit in overall mortality. Fifth, this is a super expensive drug costing more than 16000 USD for 150mg. For treating cancer, such prices have already become the norm but for preventing a future cancer that you may or may not develop, is this even worthy of consideration?

Ipilimumab in a checkmate

It has not been a very good month for ipilimumab. In the first-line treatment of squamous non-small cell lung cancer, ipilimumab in combination with chemotherapy failed to improve outcomes. Probably, this is not a big deal now as pembrolizumab has already been approved in first-line and nivolumab in 2nd line for these cancers. However, this reiterates the lesson that immunotherapies aren’t the magic bullet for every cancer.

Sarcoma continues to be a challenge

I can’t keep count of the negative trials reported in this dreadful disease. “Evofosfamide is a hypoxia-activated prodrug of bromo-isophosphoramide mustard” reads the first sentence of the abstract but despite the complicated name and mechanism this drug didn’t improve any survival when added to doxorubicin.

There was a welcome study in JAMA Oncology that found that most of the survival benefits seen with statins in observational studies are probably due to selection and immortal-time biases. However, I wouldn’t discourage future trials (but not observational studies) of statins in cancer yet because not all statins are the same, not all cancers are the same, and statins probably have a use as an adjunct therapy in combination with other treatments rather than a use as a sole strategy.

For those who think financial toxicity is fake news

It’s beyond belief but some oncologists do think that financial toxicity of cancer treatment is “fake news” because patients are insured and that any maneuvers to solve financial toxicity, such as bringing the costs of cancer drugs down, would stifle innovation. They should read the first sentence of the Discussion of this important study: “More than one-third of insured cancer patients receiving anticancer therapy faced out-of-pocket costs that were greater than expected, and patients with the most distress were underinsured, paying almost one-third of their income in health care-related costs.” More than one-third of insured patients!

This one is a sad selfie. In our meta-analysis of trials testing shorter durations of trastuzumab as adjuvant treatment for HER2 positive early breast cancer, we found that the longer 1 year duration was indeed superior to the shorter courses. We had hoped that we could show the non-inferiority of shorter duration but the results suggested otherwise. However, for resource limited settings, shorter duration of therapy can still be considered, especially for node negative and hormone positive disease. These issues are discussed in detail in this news coverage of the article. Hopefully in future, biosimilars and generics lower the price of trastuzumab so much that the duration of therapy doesn’t become a topic of discussion anymore. Just a hope.

Bishal Gyawali, MD is a postgraduate trainee in medical oncology at the Graduate School of Medicine, Nagoya University, Japan, where he is also a PhD candidate under the Japanese government scholarship. He is also a medical consultant at Anticancer Fund, a not-for-profit organization based in Belgium as well as holds an affiliation at Institute of Cancer Policy, UK. His areas of clinical and research interests include evidence-based oncology practice, global oncology, cancer policy, cancer management in resource-limited settings, financial toxicities of cancer treatment, clinical trial methods and supportive treatment of cancer. He has no conflicts of interest to declare. Dr Gyawali tweets at @oncology_bg. Read his previous blog posts here.