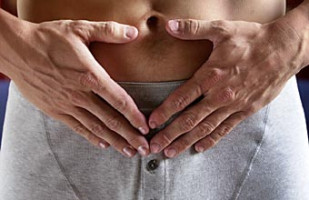 A clinical trial of nearly 2,000 men shows that adding abiraterone acetate (Zytiga) to a standard initial treatment regimen for high-risk, advanced prostate cancer lowers the relative risk of death by 37%.

This is the largest study of abiraterone as first-line therapy for advanced prostate cancer.

“Abiraterone not only prolonged life, but also lowered the chance of relapse by 70% and reduced the chance of serious bone complications by 50%,” said lead study author Nicholas James, BSc, MBBS, PhD, Professor of Clinical Oncology at Queen Elizabeth Hospital in Birmingham, United Kingdom. “Based on the magnitude of clinical benefit, we believe that the upfront care for patients newly diagnosed with advanced prostate cancer should change.”

Despite ADT, other organs in the body, including the prostate gland, continue to make small amounts of testosterone and other androgens.

Abiraterone stops production of both testosterone and other androgens throughout the body by targeting an enzyme that converts other hormones to androgens.

STAMPEDE is an ongoing multi-arm, multi-stage randomised clinical trial conducted in the United Kingdom and Switzerland.

The men had either locally advanced or metastatic cancer, and all were commencing long-term standard ADT for the first time.

The standard therapy consisted of ADT for at least two years; men with locally advanced cancer (48% of all patients) could also receive radiation therapy in addition to ADT.

A novel approach to clinical trial design meant that this comparison recruited patients much more quickly than most academic-led trials, and STAMPEDE will report randomised data from at least 10 comparisons over two decades.

At a median follow up of 40 months, 262 deaths had occurred in the standard therapy group and 184 in the abiraterone group.

The three-year overall survival rate was 83% in the abiraterone group vs. 76% in the standard therapy group.

Abiraterone lowered the relative chance of treatment failure (measured by worsening scans or symptoms, or elevated PSA level) by 71% compared to standard therapy.

The effects were consistent across the different subgroups of people enrolled in the trial.

Overall, side effects were similar between the two groups.

Severe side effects were more common in the abiraterone group, occurring in 41% of patients compared to 29% of patients in the standard therapy group.

The main side effects occurring more frequently with abiraterone were cardiovascular problems such as high blood pressure; there were also more liver problems.

There were two treatment-related deaths in the abiraterone group and one in the standard therapy group.

Research is needed to see if these two treatments could be combined so patients can have the benefits of both drugs.

For now, this is not known, and the researchers are planning molecular analyses of tissue samples collected in the study to see if a subset of patients would benefit more from adding either docetaxel or abiraterone.

Data from the study are also contributing to indirect comparison of outcomes with adding docetaxel, abiraterone, and other treatments using a “network meta-analysis” approach.

“It is possible that certain patients who have a fast-growing cancer might benefit from a combination of abiraterone and docetaxel, but we need more research to confirm that,” said Dr. James.