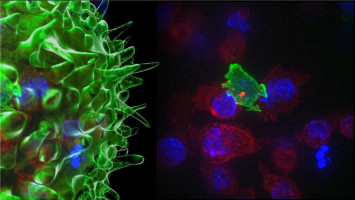 Combining the kinase inhibitor ibrutinib with an investigational personalised cellular therapy known as CTL119 can lead to complete remission in patients with high-risk chronic lymphocytic leukaemia (CLL), according to new research from the Perelman School of Medicine at the University of Pennsylvania and Penn’s Abramson Cancer Center (ACC).

The team will present the results from its pilot study of this combination therapy during the 2017 American Society of Clinical Oncology (ASCO) Annual Meeting.

The team will present on the first 10 patients in the trial, each of whom had been taking ibrutinib for at least six months but had not achieved a complete remission.

They were then infused with their own engineered “hunter” T cells.

Eight of nine patients who are evaluable for response had no evidence of disease in their bone marrow at three months, and all remain in remission after a median follow-up period of six months, with a range from 0.5 to 9 months.

One patient was found to have a partial response in their marrow.

The research team is led by Carl June, MD, the Richard W. Vague Professor in Immunotherapy in the department of Pathology and Laboratory Medicine and director of Translational Research in the ACC, along with David Porter, MD, the Jodi Fisher Horowitz Professor in Leukaemia Care Excellence and director of Blood and Marrow Transplantation in the ACC.

The data will be presented by the study’s first author, Saar Gill, MD, PhD, an assistant professor of Haematology-Oncology.

“Combining ibrutinib with the CTL119 therapy achieved very powerful results for these patients, and with limited toxicity,” Gill said. “This newer, coupled approach gives us hope that personalized cell therapies could be an important option for high-risk CLL patients on these types of drugs.”

CTL119 manufacturing begins with a patient’s own T cells, some of which are removed and then reprogrammed in Penn’s Clinical Cell and Vaccine Production Facility with a gene transfer technique designed to teach the T cells to target and kill tumour cells.

The engineered cells contain an antibody-like protein known as a chimeric antigen receptor (CAR), which is designed to bind to a protein called CD19 found on the surface of cancerous B cells.

The modified “hunter” cells are then infused back into the patient's body, where they multiply and are believed to attack the cancer cells.

Patients in the trial had been on ibrutinib for a minimum of six months and had not achieved a complete response when they received an infusion of engineered cells split over three consecutive days.

All had abnormalities of TP53 or ATM – two mutations associated with high-risk disease – and two patients had increasing BTK C481S clones, also a high-risk marker.

The new data builds off several preclinical studies supporting the use of ibrutinib with CAR therapy.

In March 2016, Penn researchers published a study in Blood that showed long-term ibrutinib treatment reverses the dysfunction of T cells in CLL and that combining CAR therapy with ibrutinib enhanced engineered T cell proliferation in mice.

CAR therapy alone has led to complete remissions and responses in some CLL patients, but not all patients respond, findings that led the Penn team to seek combination therapies that might enhance efficacy of the therapy.

In 2015, Penn Medicine researchers reported in Science Translational Medicine an overall response rate of 57 percent in CLL patients treated with CAR therapy, and a complete remission rate of 29 percent.

Ibrutinib is a well-tolerated, oral drug that improves symptoms and survival in high-risk CLL patients, but is not curative and requires continuous treatment for life.

It rarely induces complete remissions by itself.

That first year on the drug may provide an optimal window to collect T cells from patients and subsequently administer a potentially curative T cell therapy, the authors said.

“These patients had a lower disease burden and were treated earlier in the course of their disease, which distinguishes it from other studies,” Gill said. “One of the challenges in treating CLL patients with personalised cellular therapy is not having healthy enough cells to manufacture. The results suggest that ibrutinib restored T cell activity in the patients."

All 10 patients who received the CTL119 cells experienced mild cytokine release syndrome (CRS), a known potentially lethal type of toxicity, within a few days after receiving their infusions; however, none required treatment with tocilizumab, an immunosuppressant drug that blocks the effects of the inflammatory cytokine IL-6.

All recovered from their CRS.

CRS can include varying degrees of flu-like symptoms, with high fevers, nausea, and muscle pain, and temporary neurologic symptoms, including delirium, and in more severe cases, low blood pressure and breathing difficulties which may require treatment in an intensive care unit.

One patient in the study developed tumour lysis syndrome and recovered.

Longer follow-up will reveal the durability of these results, the authors said, and may support the evaluation of a first-line approach with ibrutinib and CAR therapy in an effort to remove the need for chronic therapy.