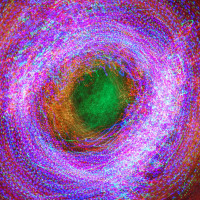 Like many forms of cancer therapy, clinicians know that proton therapy works, but precisely how it works is a bit of a mystery.


The basic principle is not in question: proton ions collide with water molecules, which make up 70 percent of cells, triggering the release of electrons and free radicals that damage the DNA of cancerous cells.

Because of their high rate of division and reduced ability to repair damaged DNA, cancerous cells are much more vulnerable to DNA attacks than normal cells and are killed at a higher rate.

Furthermore, a proton beam can be focused on a tumor area, thus causing maximum damage on cancerous cells and minimum damage on surrounding healthy cells.

However, beyond this general microscopic picture, the mechanics of the process have been hard to determine.

"As happens in cancer therapy, they know empirically that it works but they don't know why," said Jorge A. Morales, a professor of chemistry at Texas Tech University and a leading proponent of the computational analysis of proton therapy. "To do experiments with human subjects is dangerous, so the best way is through computer simulation."

Morales has been running computer simulations of proton-cell chemical reactions using quantum dynamics models on TACC's Stampede supercomputer to investigate the fundamentals of the process.

Computational experiments can mimic the dynamics of the proton-cell interactions without causing damage to a patient and can reveal what happens when the proton beam and cells collide from start to finish, with atomic-level accuracy.

Quantum simulations are necessary because the electrons and atoms that are the basis for proton cancer therapy's effectiveness do not behave according to the laws of classical physics. Rather they are guided by the laws quantum mechanics which involve probabilities of location, speed and reactions' occurrences rather than to the precisely defined versions of those three variables.

Morales' studies on Stampede, reported in PLOS One , have determined the basic byproducts of protons colliding with water within the cell, and with nucleotides and clusters of DNA bases - the basic units of DNA. The studies shed light on how the protons and their water radiolysis products damage DNA.

The results of Morales' computational experiments match the limited data from physical chemistry experiments, leading to greater confidence in their ability to capture the quantum behaviour in action.

Though fundamental in nature, the insights and data that Morales' simulations produce help researchers understand proton cancer therapy at the microscale, and help modulate factors like dosage and beam direction.

"The results are all very promising and we're excited to extend our research further," Morales said. "These simulations will bring about a unique way to understand and control proton cancer therapy that, at a very low cost, will help to drastically improve the treatment of cancer patients without risking human subjects."