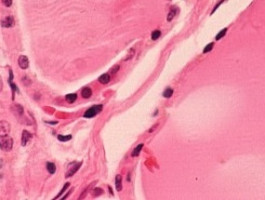 A phase III randomised controlled trial of custirsen in combination with cabazitaxel/prednisone in patients with previously-treated metastatic, castration-resistant prostate cancer has shown no significant survival gains compared to cabazitaxel/prednisone alone, according to data presented at the ESMO 2016 Congress in Copenhagen.

“Despite the negative outcome of the trial, the evaluation of custirsen in prostate cancer was conducted on the basis of solid preclinical and clinical evidence supporting anti-tumour activity,” said principal investigator Professor Karim Fizazi, head of the Department of Cancer Medicine at the Institut Gustave Roussy, Villejuif, France.

Custirsen blocks production of the protein clusterin, which is known to be involved in carcinogenesis and tumour growth, as well as contributing to treatment resistance.

In the AFFINITY trial, 635 patients with metastatic, castration-resistant prostate cancer – who had previously been treated with docetaxel — were randomised to 21-day cycles of custirsen plus cabazitaxel/prednisone or  cabazitaxel/prednisone plus placebo, until disease progression, unacceptable toxicity, or ten cycles.

The same was observed in the 62% of patients who met the criteria for poor prognosis, where median overall survival was 11.1 months among those taking custirsen and 10.9 months in those in the placebo group.

“I am obviously disappointed with the results but am proud to have been involved in this programme, and we will take the learnings of this trial to advance our knowledge of the disease in the hope to further advance care,” Fizazi said.

“Custirsen remains a viable candidate currently being evaluated for the treatment of non-small cell lung cancer, as failure in one tumour type does not predict the outcome of trials in other indications,” said Fizazi.

Commenting on the study, Dr Cora Sternberg, Chief of the Department of Medical Oncology at San Camillo Forlanini Hospital in Rome, Italy, said “A number of approaches have been investigated to overcome resistance in prostate cancer, including the use of novel taxanes and tubulin inhibitors, and the inhibition of cell survival pathways.”

“Given the results observed using a taxane as either first-line or second-line chemotherapy in castration resistant prostate cancer, the hypothesis was that combination with custirsen may decrease taxane resistance and enhance the survival benefit of taxane therapy,” Sternberg said.
“There was a strong rationale for adding custirsen to chemotherapy to overcome resistance but unfortunately the final results were negative. We likely need even more robust biological molecular stratification before launching phase III trials,” concluded Sternberg.