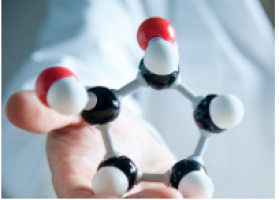 The insights could support innovation in creating new classes of anticancer drugs.

"The short half-life of actinium-225 offers opportunity for new alpha-emitting drugs to treat cancer, although very little has been known about actinium because all of its isotopes are radioactive and have short half-lives," said Maryline Ferrier, a Seaborg post-doctoral researcher on the Los Alamos team. "This makes it hard to handle large enough quantities of actinium to characterise its chemistry and bonding, which is critical for designing chelators."

The insights from this new study could provide the needed chemical information for researchers to develop ways to bind actinium so that it can be safely transported through the body to the tumour cell.

"To build an appropriate biological delivery system for actinium, there is a clear need to better establish the chemical fundamentals for actinium," Ferrier said. "Using only a few micrograms (approximately the weight of one grain of sand) we were able to study actinium-containing compounds at the Stanford Synchrotron Radiation Lightsource and at Los Alamos, and to study actinium in various environments to understand its behaviour in solution."

Medical isotopes have long been a product of the Los Alamos specialty facilities, which create strontium-82, germanium-68 and other short-lived isotopes for medical scans.

Taking advantage of the unique multidisciplinary capabilities of the Laboratory, researchers use the linear particle accelerator at the Los Alamos Neutron Science Center (LANSCE) to provide rare and important isotopes to the medical community across the United States.

The expansion into actinium exploration moves the research forward toward treatment isotopes, as opposed to only diagnostic materials, says Ferrier.

For the actinium work, a spectroscopic analysis called X-ray Absorption Fine Structure (XAFS) was used, a sensitive technique that can determine chemical information such as the number of atoms surrounding actinium, their type (i.e., oxygen or chlorine) and their distances from each other.

The study showed that actinium, in solutions of concentrated hydrochloric acid, is surrounded by three atoms of chlorine and six atoms of water.

Americium, another 3 actinide often used as a surrogate for actinium, is surrounded only by one chlorine atom and eight water molecules.

It has been assumed in the past that actinium would behave similarly to americium.

"Our study shows that the two are different in a way that could help change how actinium ligands are designed," Ferrier said. "We're actively working to gather more fundamental data that will help understand how actinium chemically behaves."

Perhaps the most potent impact of these studies will be on the application of the isotope actinium-225, which is used in a novel, attractive cancer treatment technique called targeted alpha therapy (TAT).

"Our determination that actinium's behaviour in solution is different than other nearby elements (such as americium) is directly relevant to TAT in a biological environment, which is always a complex solution," said Ferrier.

Actinium-225 has a relatively short half-life (10 days) and emits four powerful alpha particles as it decays to stable bismuth, which makes it a perfect candidate for TAT.

However, TAT with actinium can only become a reliable cancer-treatment if actinium is securely bound to the targeting molecule, as the radioisotope is very toxic to healthy tissue if it is not brought quickly to the site of disease.