Comment: Reasonable to conclude that pembrolizumab is non-inferior to chemotherapy

Dr Richard Schilsky and Dr Josep Tabernero comment on data, during a press conference at the 2019 American Society of Clinical Oncology (ASCO) Annual Meeting, from the KEYNOTE-062 trial.

This was a phase III randomised trial studying the use of pembrolizumab in patients with advanced gastric or gastroesophageal junction as a comparable alternative to chemotherapy.

I was asked to make a few remarks about this study in particular, having myself been a GI oncologist for about thirty years over here at the University of Chicago and having seen many of these patients. This is a tough disease to treat, the patients are often older, often frail, often malnourished and really until just recently the only available treatment has been standard cytotoxic chemotherapy which, of course, is difficult to tolerate as you just saw in the safety profile of the chemotherapy arms in this study. So this is a disease that has been in desperate need for new treatment approaches. There was a little bit of a glimmer of hope some years ago when it became clear that about 15% of patients with gastric cancer and gastroesophageal cancer had amplification of the HER2 gene, the same gene that’s amplified in breast cancer, and in fact that by treating those patients with trastuzumab or Herceptin in combination with chemotherapy actually improved their overall survival and trastuzumab is now FDA approved in that indication. But that’s the minority of this population so certainly this study demonstrating the potential for immunotherapy to substantially improve the outcomes of these patients is really important.

I want to make a brief comment about this concept of non-inferiority which is oftentimes difficult to grasp. Basically, what the non-inferiority study is showing is that, in essence, at the beginning of the study the investigators declared that they were willing to accept the possibility that pembrolizumab could be at least 20% worse than chemotherapy and still consider it to be not inferior. That’s a clinical assessment, not really a statistical assessment. The statistics then are set up to be able to determine whether or not that non-inferiority boundary is met or not and in this case you could see that the results did fall within the non-inferiority boundary. So it’s certainly reasonable to conclude, as the study did, that pembrolizumab is not inferior to chemotherapy. Does that mean it’s better than chemotherapy? No but it certainly seems to meet the pre-specified definition of not being worse. Together with a substantially improved safety profile, I think it would be pretty clear to me that this would be a preferred treatment for this patient population.

It also seems to be fairly clear, although it’s not so clear whether it met the traditional definition of statistical significance, but certainly clinically it seems to be quite clear that pembrolizumab is superior to chemotherapy in the high biomarker positive population with CPS ≥ 10.

So what I take away from this study is for patients with advanced gastric and gastroesophageal cancer pembrolizumab should really, in many cases, replace chemotherapy as a first line treatment for this population. It’s certainly not worse, it may well be better. I think it’s an open question as to why there was no additive benefit by combining pembrolizumab and chemotherapy and I wonder, Josep, if you actually have a thought about that?

Thank you, because this is an excellent question. There are several factors that we are evaluating. First of all a synergistic effect may be also chemotherapy dependant. In this particular case patients with gastric and gastroesophageal junction cancer are treated with a combination of cisplatin and fluoropyrimidine and this is a little bit different than what we have in other diseases. Except for squamous cell from head and neck cancer where actually the backbone chemotherapy in some of the studies that are being presented as we speak show a benefit. But in this particular case the population of patients have a different tumour origin, these are squamous cell carcinomas rather than adenocarcinomas. So we still have to do more studies to understand why with this chemotherapy backbone actually we don’t see a clear synergistic effect for superiority in overall survival.

4 Jun 2021
Nivolumab plus ipilimumab or NIVO plus chemo versus chemo as firstline for advan...
Dr Ian Chau - The Royal Marsden, London, UK 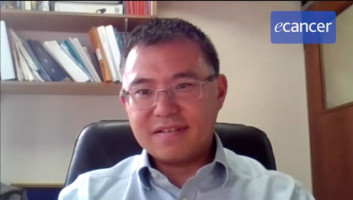